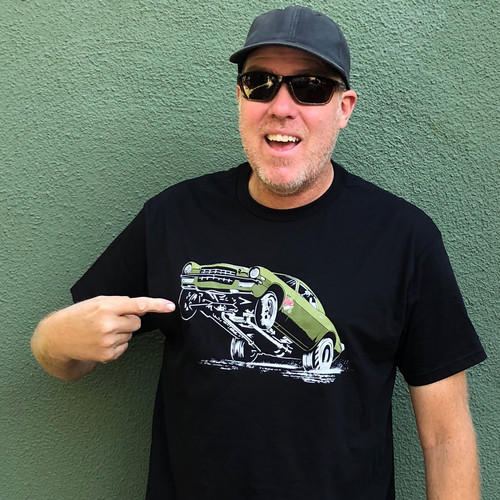 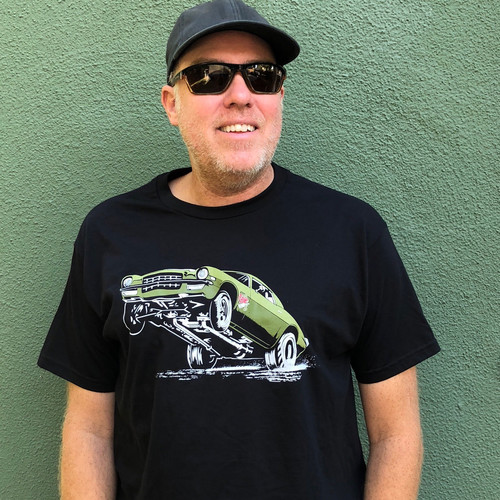 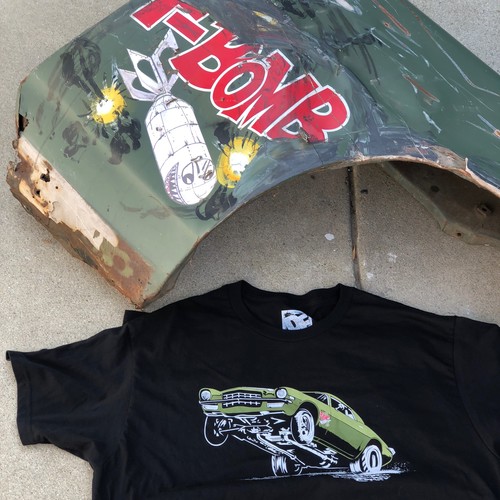 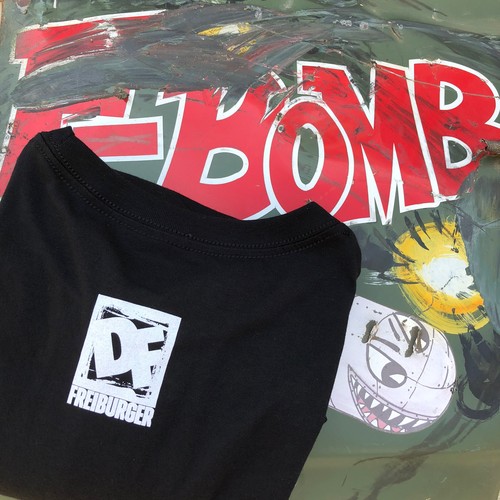 Shipping Info ▾ Size & Product Details ▾
$2 for each item +
per order
An "order" can have multiple items.
Currency is in USD.
We ship to all APO and FPO military addresses.
The “F-Bomb Wheelies On Dirt!” Shirt

You’ve seen it in the magazines, in the movies, and all over the Internet—and now you can wear it! Yup, this new DF t-shirt features the F-Bomb Camaro doing those mythical wheelies on dirt, just like on the big screen.

I’ve found that this car has many fans who don’t know its whole story, so here’s a review. Way back in 2003, I had a 1973 Camaro that I’d swapped for a few hundred bucks plus a big-block intake manifold and I had dreams of building a land-speed race car. I soon partnered with Keith and Tonya Turk on their car instead of building my own, so I had a spare F-body sitting around. Meanwhile, engine builder Tom Nelson wanted to R&D some turbo headers for the car, so he picked up the ’73 from my place. Then he decided to go all-out, and the next time I saw the car it was stripped to bare metal and was becoming build #1 for Nelson Supercars. We decided to create an all-around performer that could drive on the street, the strip, or at top-speed venues. Our only argument was over the paint. Nelson wanted it all black, but I wanted something more memorable and landed on the army-green theme with WWII nose art. I won. These days, even Nelson agrees it made the car special.

Over the last decade, people have claimed that this is the car that made satin paint mainstream, the car that made dimple-die holes a fad, the car that brought second-gen Camaros into popularity, and even the car that made turbos a thing for street cars. Those are generous claims, but I can’t deny the F-Bomb has become an icon with its 1,500 hp, 406ci, twin-turbo small-block with excellent fabrication under the gruff exterior.

The car appeared on the March 2007 cover of Hot Rod magazine, and was soon tagged to appear in the Fast & Furious movie (the fourth installment in the franchise). The production company built about five clones of the car for a brief chase scene near the end of the film where it famously did a big wheelstand in the dirt on its way to killing the bad guy, just after a big close-up on the F-Bomb logo. This locked the car’s legacy, though many people think I cloned the car from the movie, when in fact Nelson built the car first and the film cameo came second.

But what about real-world wheelies? The car has run a best of 9.06 at 155 mph in the quarter-mile, but doesn’t lift the front end. And 9.06 is so close, but not in the 8s as originally promised. The F-Bomb fell to a tumultuous time in my career, as it was completed just as I left my magazine job to start an online TV site that consumed a year of work and cash before folding. I never returned to give the car the tuning time it deserved, and was constantly thwarted by fighting a transmission problem that was eventually solved by Mikes Transmissions and Dice Converters. Right now the car is being converted to Holley EFI and I hope to finally run in the 8s—hopefully against Mike Finnegan in his Blasphemi ’55 Chevy.

Meanwhile, you can fly the F-Bomb on a shirt of your own! These soft, 100% cotton shirts are black with the “Wheelies On Dirt” action on the front and a small DF logo at the back neckline.